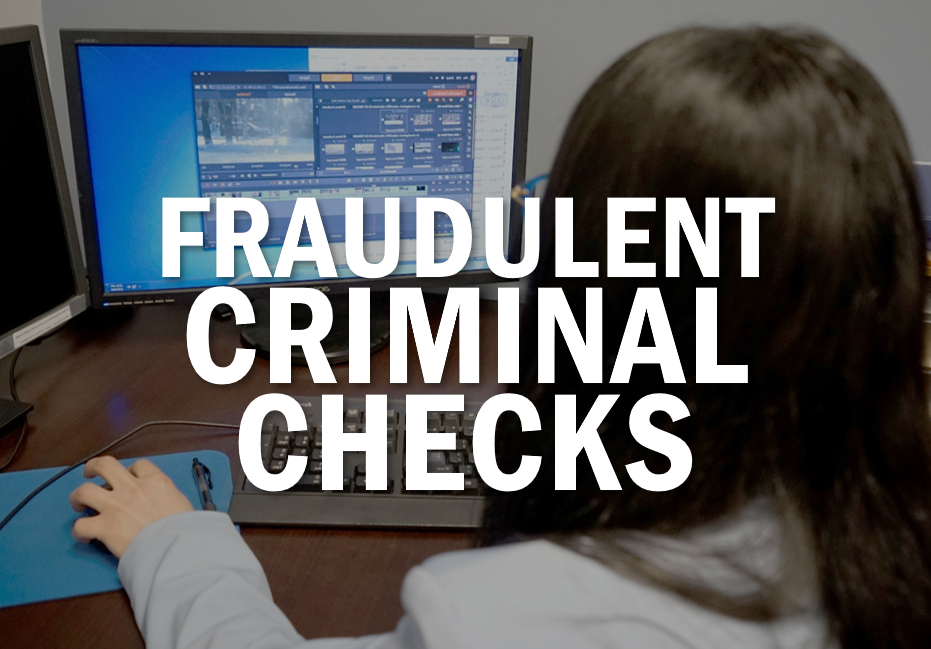 People are your biggest investment. How do you ensure you're getting the right ones?

A former client – a large employer - came to our Screening Manager last week.

“I know that we stopped using you guys for screening when we outsourced our high-volume recruiting to that staffing agency, but we’re starting to think something weird’s going on with our criminal checks. Can you help?”

So we did a little investigation, and it was true: Half the criminal checks which were being submitted for new hires turned out to be false. The staffing agency was duplicating clean criminal records checks, changing the names on the documentation, and submitting them along with new hires.

What was worse was that when we continued to investigate the problem, we discovered that it wasn’t limited to a single staffing agency: It was more widespread than we’d imagined.

High-volume hiring can be challenging.

We know that the pandemic has made high-volume hiring even more difficult than it used to be. Employers and staffing agencies are under more pressure than ever to hire faster and for less money. At the same time, many potential new hires for junior roles may be new Canadians here on work visas, which you don’t get if you haven’t been fully vetted at a government level.

So in some ways it’s not surprising that staffing agencies might think, “Well, we’ve already done a quick background check on this person, and they have a work visa, so they’re probably clean – we’ll just insert their name on a clean criminal check we’ve got on hand.”

The staffing agency saves some time, pockets the fee they’re being paid by the employer for the criminal checks, and hopes that it all works out.

Employers are shouldering more risk than they realize.

The obvious downside for an employer, of course, is that by hiring someone based on a fake criminal records check, they’re putting their operations at risk. While the majority of their new hires are doubtless perfectly trustworthy, the handful of unidentified bad actors who get through can do serious damage, which may have been avoided with an accurate criminal records check. (And it’s important to remember that it can take time for a criminal act to show up on a criminal check, so even someone who was ‘fully vetted’ 12 months ago may no longer have such a clean record.)

What’s more, forgery is a criminal offense in Canada, carrying with it both jail time and significant fines. Even if the employer had no idea the staffing agency was falsifying criminal checks, they’re putting the organization at risk of substantial legal fees, lawsuits and negative publicity – all of which can put a serious dent in the bottom line.

What employers can do to protect themselves.

If your organization is hiring hundreds of people every month, it may not be practicable to take your criminal checks in-house or scrutinize each report in depth. However, there are a few simple steps that will help to protect your organization from being blindsided by widespread fraud.

1. Choose your staffing partner(s) wisely. If you’ve been working with the same agency (or agencies) for years but have noticed a recent change in efficiency or service, you may want to re-examine the relationship. Our former client came to us because they’d noticed a gradual shift in the level of service they were getting, and something seemed ‘off’.

Additionally, if you’re going through the process of choosing a new staffing partner, keep in mind that if you’re being offered unbelievably low prices and turnaround times, it’s because some corners are being cut. Ask questions, and ask for referrals.

2. Don’t let the screening piece be an afterthought. We know that when staffing and recruitment agencies pitch for higher-volume business, screening is often listed as a ‘value add’ or even just included in the process without being articulated in detail.

However, whether it’s education, employment or criminal checks, ensuring this piece is done legally, throroughly and reliably is more important than ever. Don’t hesitate to ask the staffing agency how they conduct their screening, and, if it’s done by a third party, who that third party will be.

3. Ask for documentation. In the case our client brought to us, it didn’t take long to discover that file names and numbers, and other information, was being duplicated in a way that would have been obvious to someone who was able to see a month’s worth of documentation at once. No one noticed at the employer end because the documents were going to different departments and no one was tasked with oversight of it all.

4. Do spot checks. This is going to sound pretty basic, but in many cases the forgers aren’t trying all that hard to cover their tracks: When they change information in a document, they’re just editing a PDF without matching fonts or colours, and in some cases they’re spelling entire names incorrectly. Making a point of a monthly eyes-on spot check of the documentation you’re receiving in regard to new hires, paying close attention to names, dates and file numbers, may be your first line of defense.

You don’t need to panic.

You just need to be careful.

Do we think that there are large numbers of hardened criminals infiltrating Canadian organizations on the strength of forged criminal records checks? No.

However, employers could be putting their existing staff and customers, as well as their own reputation and bottom line, in jeopardy without even realizing it. And that’s just not good business.